Today I have time traveled, been bumped from my seat, and ran through an airport Home Alone style in very loud flip flops. (Sanuks, I love you but running through the airport wearing you and carrying a 20 lb. backpack and wearing a long skit was not my best plan).

Currently, I’m sitting in LAX (more on that later), charging all my devices and waiting for my next 6 hour flight.

The people are pushy, the food is overly hipster and it’s like this big, fancy, chaotic mess…

It looks nice (minus the construction). The chairs are arranged in a cool pattern, the food court looks cool and has lots of cool looking places to sit.

But there’s no space. And the chairs are cute but not functional. And there’s a very confusing shuttle system that is not terribly well marked.

Of course, it could just be that I am in a bad mood because I’ve spent six hours flying from Philly to LA, and before that I ran through the airport in Philly to just barely make my flight, and before that my first flight this morning was delayed an hour (which was the reason for the mad dash through the Philadelphia airport).

That could absolutely be it. And I still have 6 more hours to go.

I just hope the next 6 hour flight is better than the one from Philly to LA. Because we ran through the airport and barely made the flight, they’d given our seats away so my party was separated. I ended up in the very back of the plane in between a nice older woman and a teenager. My seat, though I hate the middle of the airplane, wasn’t bad, but all the people that sort of just…stand there and stare at you while they wait for the bathroom…weird. And if you get air sick, I absolutely do not recommend the back of the plane.

Which brings me to a salient lesson from this morning. So when we got to the airport and made it through security at 7 AM for our 7:45 flight (totally on time), we realize that the 6 AM flight to Philly hasn’t left yet and we get the phone call that our flight won’t be ready to go until 9 AM. That’s a problem when you have a 9:55 AM connecting flight in Philly, and if you miss that, it messes up the flight from Philly to LAX, and then from LA to Hawaii.

So here we are, standing in line like everyone else at the ticket counter to see what we can do to NOT miss our flight and have to reschedule…everything. Then around 7:30 they start boarding the 6 AM flight people. And what do you know, a couple decides to get in line to board the plane even though they were on the 7:45 flight. One the folks in line figured it out, there were some pointed comments made, but the couple continued to stand in line for the other flight. Then someone said something to them directly, mentioning that there’s a line and we’d all been waiting, so they couldn’t just go up to the front.

The person’s response?  A very flippant “we just want some information” was the answer.

But that’s what everyone is doing. When that was pointed out to this couple, they refused to move.

I mean, how entitled can you get?

What makes you so special that you don’t have to wait in line like the rest of us? Seriously. Totally rude.

They had a few spots left on the 6 AM (no leaving at 745) flight and everyone in that line wants the few seats. And I felt like if they gave the seats to the Rude Couple, the line would riot. Because the line was NOT happy with the rude couple. At all.

So here’s the best part.

He finally sneaks in and grabs the lady that had just finished checking in all the 6 AM people who were originally scheduled for that flight. She looks right at him and says “Sir, I understand you have connecting flights. That’s what everyone in that line right there has. So I’m going to need you to head to the back of the line and wait your turn.”

I’m surprised the line didn’t cheer. I did a little inside cheer for her.

And then the airline kept calling folks to inform them about the flight changes. So literally everyone’s phone went off at the same time. Like, three times because the flight time kept changing. So one guy just turned his phone on speaker and held it up.

I will say this: nothing brings people together like shared misery at the airport. 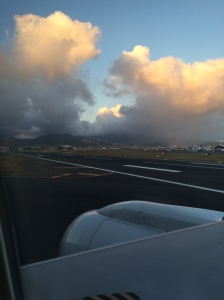 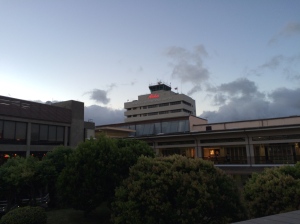 Adventures of the Polka-Dotted Teacher

Fun and Fearless in First

Teaching In The Fast Lane

Just a Girl and Her Blog
Gretchen, In-Between