From the (admittedly, many) gifs on this blog you might have figured out that my tastes run a little…nerdy. Science fiction and fantasy are two of my favorite genres. But I’m also a theater kid…so I’m all about the Bard, bout the Bard, not Marlowe. (sorry, I couldn’t help it!)

I am doing a re-watch of Stargate (the TV show) while I do work for the next school year (see, teachers do work during the summer!) and one of the episodes is titled “Brief Candle”. And that got me thinking. 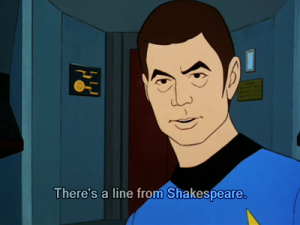 Brief candle is a reference to a line from Macbeth:

“Out, out, brief candle! Life’s but a walking shadow, a poor player that struts and frets his hour upon the stage and is heard no more. It is a tale told by an idiot, full of sound and fury, signifying nothing”

If you read that, you notice there’s also the title of a William Faulkner novel (The Sound and the Fury) but…I digress. So with that particular thought, my brain went down the rabbit hole of useless knowledge and brought to mind two other Stargate episode titles. These were both in the fourth season of Stargate: Atlantis, the titles are “This Mortal Coil” and “Be All My Sins Remember’d”. These weren’t considered part of a two-parter, but they were connected, as the story flowed almost immediately from “This Mortal Coil” and picked up in “Be All My Sins…”. These, of course, both come from the uber-famous soliloquy in Hamlet that starts off “to be, or not to be?”.  “be all my sins” is actually the last line of the soliloquy.

“To die, to sleep,
To sleep, perchance to Dream; aye, there’s the rub,
For in that sleep of death, what dreams may come,
When we have shuffled off this mortal coil,
Must give us pause.”

“Soft you now,
The fair Ophelia? Nymph, in thy Orisons
Be all my sins remembered”

I don’t care who you are, that’s powerful stuff. Now, if we continue down the rabbit hole, we realize that Shakespeare is all over science fiction. Lines from plays act as titles for episodes in shows like Babylon 5, The Twilight Zone, and Dr. Who. Lines, plays, and characters are referenced within those shows as well, and many more. For example, two of the planets in Firefly are named “Ariel” and “Miranda” (Miranda is the “brave new world”) which all comes from the play The Tempest.

Which brings the question: why? Why is Shakespeare invoked in shows that are usually set hundreds, if not thousands, of years after he lived, and in places where there are almost no similarities to Elizabethan England?

One answer, the answer I’m not fond of, is that shows, especially science fiction ones, use Shakespeare to “raise the brow” on their show so it doesn’t see so “low brow”. I have no doubt that shows did that, but the ones I have mentioned are your sci-fi classics. Does anyone really think Dr. Who would throw in Shakespeare to avoid appearing “low brow”? No. I don’t think so. Some of these shows are filled with literary references.

The 2003 Battlestar Galactica series references religious and political works and figures, both historical and mythological. Apollo? Hera? ringing any bells? As well as quoting Shakespeare in few episodes. And Babylon 5 is a treasure trove of literary references. The show quotes Yeat’s poem “The Second Coming” for crying out loud.  (You know, “what rough beast, his hour come round at last, slouches toward Bethlehem to be born?”) They also quote Upton Sinclair, reference Tolkien, Edgar Rice Burrows, Asimov, and, of course, Shakespeare.

So I don’t think the whole “raise the brow” reason is the real one. No, to find the real one we need to look at the science fiction series that references Shakespeare more than any other: Star Trek. I mean, one of the movies is called “The Undiscovered Country” and one of the Klingons (played by the magnificent Christopher Plummer) quotes Shakespeare extensively, though he does suggest that you must “read it in the original Klingon”.

(sidebar: if any of you are interested in doing so, the Klingon Language Institute – yes, that’s a real thing – has translated Hamlet and Much Ado about Nothing, and are working on translating Macbeth into Klingon. Click on the title to see that I’m not kidding. You can buy them on Amazon.)

They don’t use these things to “raise the brow” on a series that is, generally speaking, a fantasy and has the potential to be incredibly silly. (tribbles, anyone?). But that’s not Trek, Trek uses it to draw parallels, to give the audience a relatable frame of reference for something fantastical. No show, in my opinion, does this more than Star Trek: The Next Generation.

Now I will begin by saying that if I had the talented, classically trained Sir Patrick Stewart as one of my leads, we’d be Shakespearing it up because he is fantastic in general, but he nails Shakespeare. He speaks lines that are linguistically very difficult and full of meaning in a way that sounds conversational and yet doesn’t lose the meaning. (If you need a recent reference, go watch Richard II from The Hollow Crown. Stewart is superb as John of Gaunt.)

So, how does Star Trek use Shakespeare? For example, in the episode Hide and Q, Q is trying to get a read on humanity and he uses Shakespeare as a sort of reference: (in this scene, Q is assuming that Picard has not read the real book in his library, which is an assumption made when the powerful Q underestimates the mortal human)

Q: Hear this, Picard, and reflect: “All the galaxy is a stage.”
Captain Jean-Luc Picard: World, not galaxy. “All the world’s a stage.”
Q: Oh, you know that one. Well, if he were living now, he would have said galaxy. How about this, uh… “Life is but a walking shadow, a poor player that struts and frets his hour upon the stage, and then is heard no more. It is a tale told by an idiot, full of sound and fury, signifying nothing.”
Captain Jean-Luc Picard: I see. So how we respond to a game tells you more about us than our real life, this… tale, told by an idiot? Interesting, Q.

So Q has judged and found humanity wanting, and Picard challenges Q on this (actually using Shakespeare to call Q an idiot, as his “game” is the “tale”.) Which is great, but it gets better. Picard then uses one of the most powerful lines from Hamlet, which in the play is used ironically, but here is delivered with the sincerity that only someone like Sir Patrick Stewart can do. (for a video of this scene, click here).

Captain Jean-Luc Picard: Oh, I know Hamlet. And what he might say with irony, I say with conviction: “What a piece of work is man! How noble in reason! How infinite in faculty! In form, in moving, how express and admirable! In action, how like an angel! In apprehension, how like a god!”
Q: Surely, you don’t see your species like that, do you?
Captain Jean-Luc Picard: I see us one day becoming that, Q. Is it that which concerns you?

In this we see a moral human going up against the omnipotent Q. By drawing on Shakespeare, and not making some Braveheart-style stirring speech, we are informed that words are powerful things, that they can help you stand up to an impossible power, but they are not always your own. It gives the scene a sense of reality, which is needed because a Captain arguing with an immortal, omnipotent, all-powerful being in the ready room of his starship is pretty out there. A stirring speech would have felt less powerful, somehow. (By quoting Shakespeare, it also sets up a little arrogance on Picard’s part, which is later corrected by Q in his own way – but that’s a story for another day).

The bard is all over The Next Generation. They perform parts of plays, Picard rattles off as many sonnets and bits of Othello that he can in a stalling effort, there are four episodes with titles from Shakespeare, largely pulling from Hamlet, but also using plays ranging from The Tempest to Henry V. 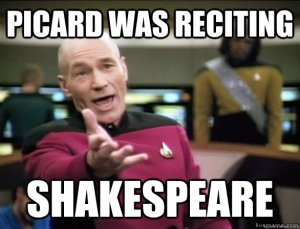 The point of this is not to keep the show more intellectual, or to show off their acting chops, it is to give context. To provide familiarity in a show where the entire premise is something that, at the moment, can only exist in the imagination. To draw parallels and make you think.

Shakespeare in science fiction isn’t new, and it isn’t going away. I, for one, love it. Whether all the “world” is a stage or all the “galaxy”, Shakespeare’s words are powerful and still relevant.

“This above all: to thine own self be true,
And it must follow, as the night the day,
Thou canst not then be false to any man.”

(and no, I don’t speak klingon. but it’s amazing what you can google)

Adventures of the Polka-Dotted Teacher

Fun and Fearless in First

Teaching In The Fast Lane

Just a Girl and Her Blog
Gretchen, In-Between